The following is a record of our previous Consultation Events and Notices used to inform the Parish of our activities.  The Design Forum held over 7th and 8th March 2018 gave the opportunity for many individuals and parish organizations to present their views.

Nineteen of these formal presentations were recorded and these can be viewed on Youtube.  When you visit Youtube all 19 videos may not automatically be visible, try selecting "Uplaods" to make them all visible.

Written submissions were also produced for the Design Forum and these are included in the Document Library. 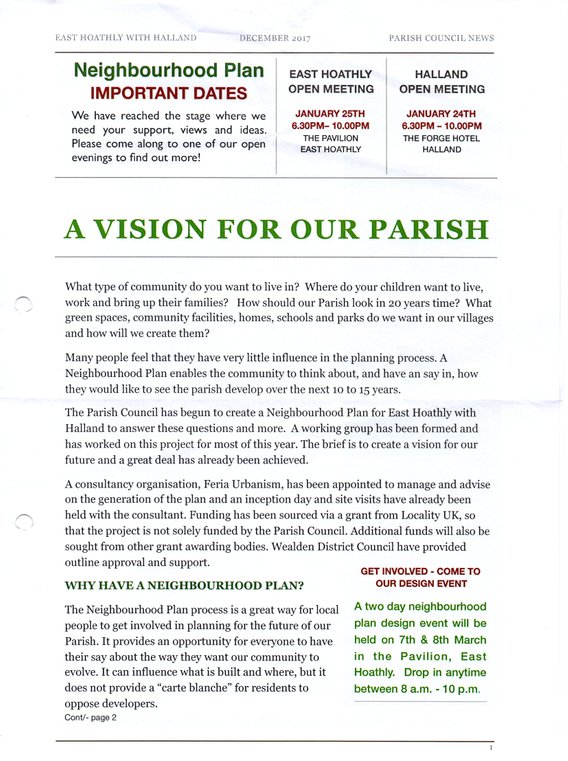 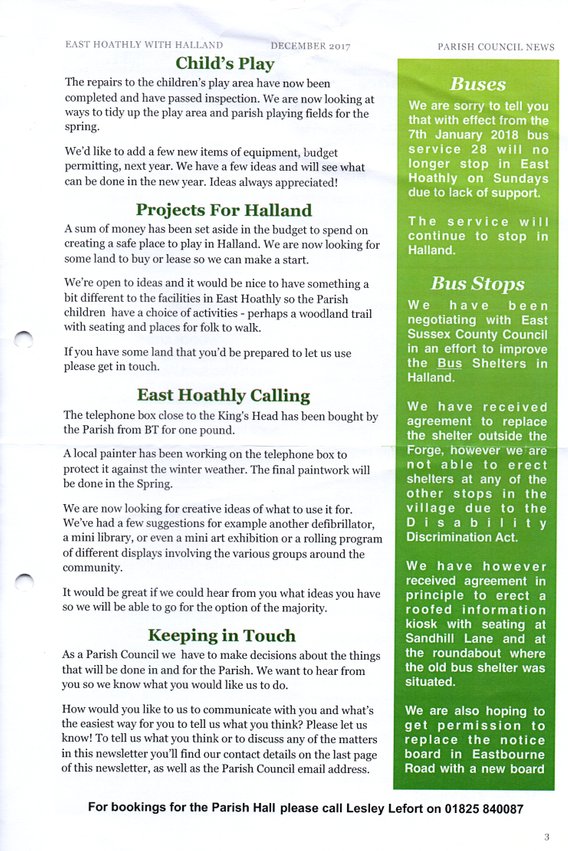 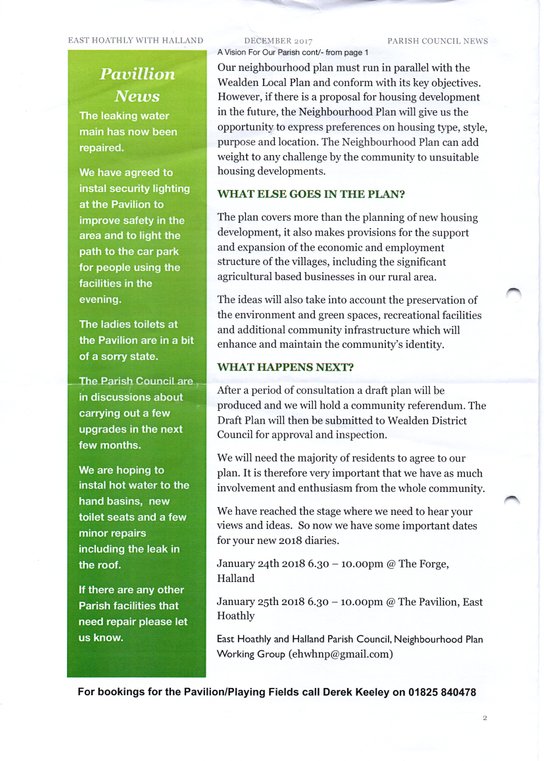 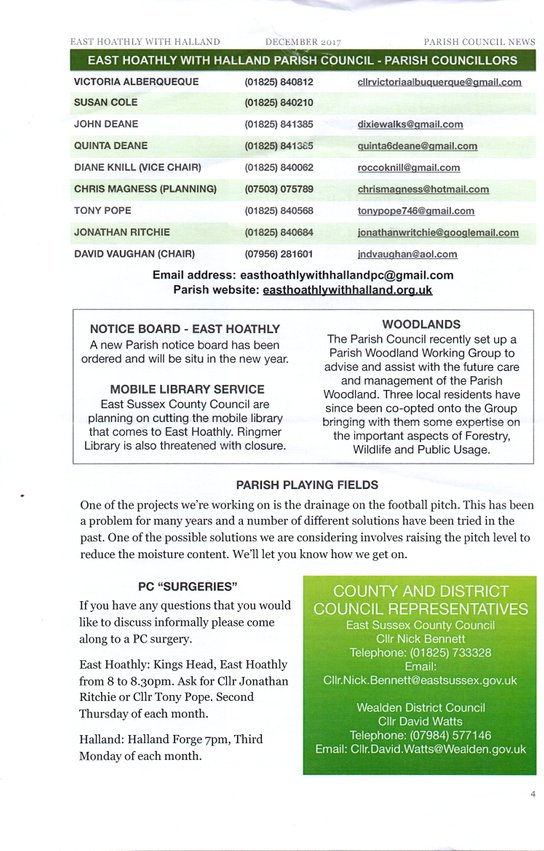 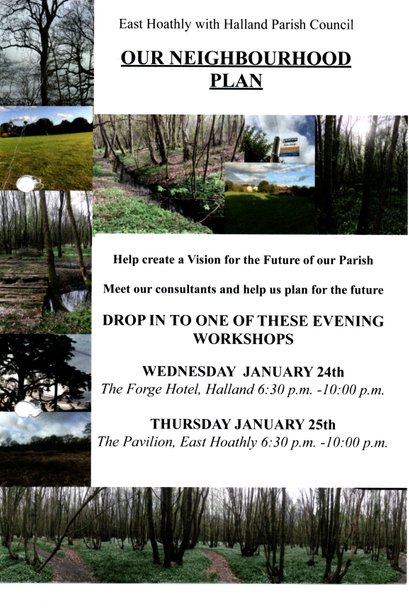 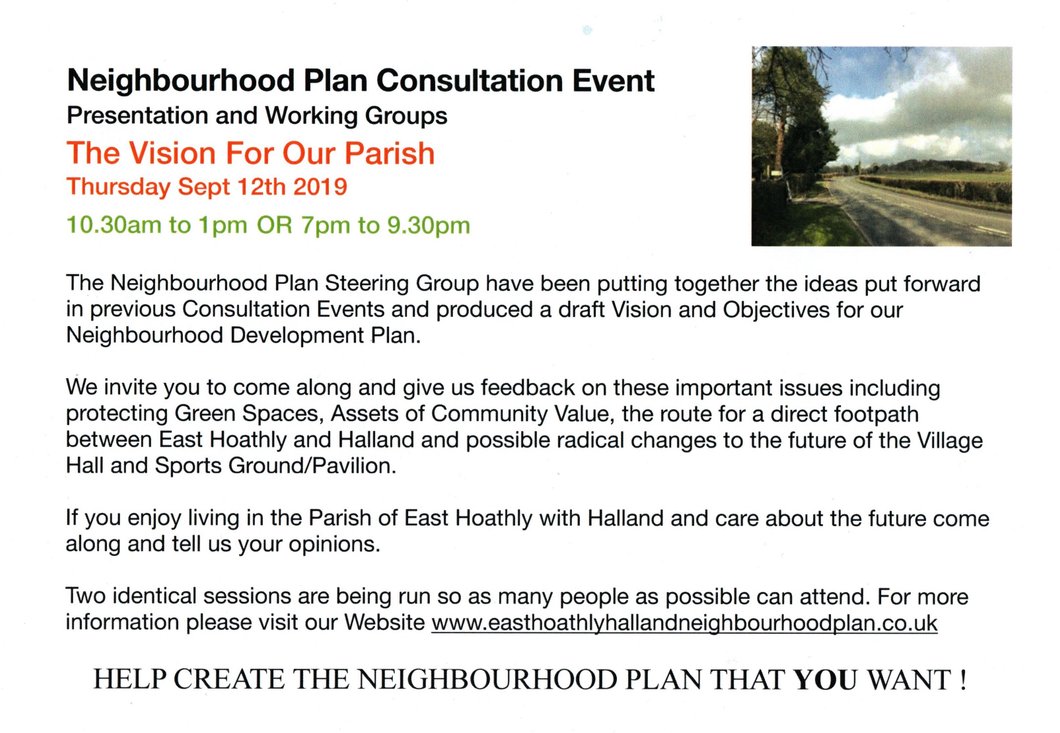 Participants in the Event were given a brief introduction into the background of the Neighbourhood Plan and then asked to split into small groups and given specific Tasks to consider and upon which to comment.

To view the Tasks select the buttons below:

This is a Summary of the Results of the Neighbourhood Plan Consultation Event held on 12 September 2019.

The event was attended by 67 people with 6 apologies given.  Two identical sessions were held one in the morning and one in the evening.  After a brief introduction people were split into small groups and given specific Tasks to consider and upon which to comment.

The Vision statement received unanimous support with the proviso that it should be changed to include “residents of all ages”.

The Objectives were generally considered achievable but that this would only if the proposals to over develop the Parish were resisted.

The Objectives were considered to be sound even if the Plan period was extended beyond 2028.

One additional Objective was proposed to cover aspects related to renewable energy.

Specific comments were received on the following Objectives.  Those not included were by default approved:

To deliver development that meets Parish housing needs and is proportionate to the size of the community and its facilities.  To resist development that does not meet the needs of local people.  To improve the balance of housing stock to provide smaller accommodation and retirement dwellings.

The Objective was strongly supported.  People wanted improvements to infrastructure before any more housing.  The need for genuinely affordable smaller houses for local people was stressed.  The scale of development was a major concern - there was no support for large scale development in excess of 10 homes.

To support the establishment of a Community Land Trust to build Low Rent homes for local working people.

The Objective was generally well supported.  There was particular support for self build options for existing residents.  Some concern was expressed regarding the selection procedure for beneficiaries of the CLT and its management structure.

To provide design guidance to ensure that future developments are sympathetic with the character of the Parish.

The Objective received qualified support with many people requiring more details before they could comment.  Some people commented that sustainable buildings and modern architecture should be considered.

To protect the integrity of existing Listed Buildings and the Scheduled Ancient Monument in the Parish and identify additional buildings suitable for protection.

The Objective was generally well supported.  Old Hartfield was suggested as a building that should be Listed.

To protect the existing Species Rich Hedgerows in the Parish and identify other hedgerows that require protection.

The Objective was fully supported and considered very important.  It was felt that we should be encouraging new hedgerow planting.

To improve the facilities for Leisure and Recreation in the Parish and in particular to improve the drainage of the East Hoathly War Memorial Sports Ground.

This Objective was supported.

To deliver a community green space and play area in Halland.

This Objective was supported but there was no consensus as to where it should go.

To protect all the Parish Footpaths and Bridleways and to establish a safe cycle/footpath between East Hoathly and Halland.

The Objective was considered very important by everyone and it was proposed that it be reworded to include “and improve”.  It was stressed that it should be both a cycle-way and footpath.

To support the improvement of Mobile and Broadband services for domestic and business users and encourage the growth of people using Broadband to work from home.

The Objective was fully supported.  Consideration was requested for a public access facility for the internet.

To encourage the re-establishment of the evening and Sunday bus service for East Hoathly.

This objective was generally supported.  The existing service was criticised for being unreliable and under used because of its inadequacies.

The Objectives were re-numbered following the Consultation Event and appear with the new numbers in Draft NDP Version 7 onwards.

The proposal to Landraise on the Sports Ground received moderate support.  Concern was expressed that the water would be discharged into other areas and create a new problem.

The re-alignment of the football pitch was well supported.  Opinions varied on the merits of improving the pitch and there was no consensus.  Some considered it unnecessary as it is not currently used at all (even when dry enough) and some considered that an all weather pitch would be the solution.

The enlarged Car Park received strong support although a few people considered that it would not encourage walking in the village.

The idea of having a Car Park at the Susan’s Close Entrance was poorly supported.

The proposal to install a Zip Wire received some support but was generally given a low priority.

The proposal to provide a fitness trail received reasonable support but there was some concern about how much it would be used.

The idea of moving the Bonfire site (to accommodate a proposed re-alignment of the football pitch) was fully supported.

The following additional comments were made: The view to the Church Tower was very important.  The Cricket Pitch was essential.  More play equipment for children was required.

This received 63% support but many significant reservations.  The reservations were mostly concerned with funding and running costs being viable.  Many groups were concerned that the facility should be capable of the widest range of activities to ensure that it was well used (eg Badminton, Netball, Stoolball, Dance, Gym, Disabled Access).

This received 58% support.  It was only considered sensible if the football pitch was rectified and more use was likely.  The retention of the Village Hall and its heritage was considered important and it was considered to have a good atmosphere.

There was good support for a new Footpath/Cycle-way between East Hoathly and Halland.  Participants indicated that 40% would use it weekly and an additional 23% would use it monthly.

A route that followed the A22 was preferred and one that was all weather and with lighting.  There was concern regarding the crossing point on the London Road.

The results have been used to produce a map has showing the usage levels of Parish footpaths.  This also indicates where problems are noted with signage or access.

The map also indicates suggested additions to the public footpath network to incorporate routes already regularly used by people or that would link up existing routes and facilitate “circular” walks around the area.

A copy of the map has been passed to the Parish Council for consideration of further action.

All the Green Spaces proposed were supported.

The Green Spaces in Halland were equally weighted.

There was strong support that the spaces provided a positive effect on physical and mental wellbeing.  People commented that the green spaces created a deep sense of calm and provided an emerald necklace protecting the Parish.

The Task sought to select the most favoured locations for small scale development.  Locations that only received one or two nominations were therefore discounted.

The Motel and Northern Quadrant to East of Woods both had 3 nominations for a mix of 5 or 10 homes.

The Triangle had 7 nominations mostly for 5 homes.

Broomy Lodge had 4 nominations mostly for 10 homes and one group specified that this should be for CLT use only.

The Green Gap on South Street had 8 nominations generally for 10 homes.

All the Assets put forward received unanimously strong approval (92-100%).  The only exception was Halland Chapel where the support was more modest at 76%.

The proposal to alter the layout of the Church Marks Lane Car Park was met with moderate enthusiasm.  The balance of the ideas favoured:

Re-siting the recycling away from the School towards the road or by the Village Hall.

A drop off zone should be created for the School.

The remaining area should be reconfigured to give increased parking with a smaller segregated path to the School entrance.

There was support for an additional Car Park closer to the Village corner.

There was support for all public car parks having an electric vehicle charging point.

The survey of bus usage indicated very low usage in that of the 67 people attending:

One person from Halland used the bus once a month.

From East Hoathly two people used the bus once a month, one used it once every 2 months and one every 3 months.

Opinions on the bus service varied from those who regarded it as so useless that it should be scrapped entirely to those who wanted a better service of at least 2 buses per hour and Sundays and evenings and to include Lewes/Brighton.

Those attending were asked if they would accept an increase in Council Tax to pay for some of the expected costs of the ideas discussed - 70% agreed with this.  It was suggested that lottery funding should be considered.